As we all know exposure during ones early years is crucial in any field. I was very fortunate growing up in a musical family and being around and playing with great jazz players in the family jazz club.  I wanted to document some of these early years and share it.  There is a mini story in this time period of my life about 4 years in itself which shaped my future.  It all started with this Clip from the Ted Mack show and 35 years later after a career i wouldn’t trade for anything i ending up back on network television as band leader with own my own jazz quartet on the Suzanne Somers Show at Universal Studios where she surprised me with this second clip below from the Garry Moore “I’ve Got A Secret Show” 2 years earlier.  Quite a journey !

In 1960 when i was 12 years old a friend of my dads Russ Martino in front conducting the band  asked him if he would allow me to join his high school jazz band which was in a different town than i lived and play lead trumpet and all the jazz.  My dad said o.k. and we ended up winning a spot as one of the first amateur bands to do this at the Atlantic City Jazz Festival performing on the same bill as Dinah Washington ,  Gerry Mulligan , Oscar Peterson Trio and Art Blakey who had Wayne Shorter with him at the time.  Picture below of the band and  wonderful tenor saxophonist and dear friend Rod Blumenau taking a solo here.

Also during that period in 1964 we did a Christmas album when a quintet was formed. Pianist Stu Hemingway a student of Bill Evans at the time organized the session with my friend and great saxophone player Rod Blumenau second from the front and trombonist Dave Barnaby leading the sled here.   My dad always told me from an early age if you are going to play trumpet you have to the lead and i guess i took him seriously as you can see from the photo !! A piece of trivia we recorded this at Nola Penthouse in NYC one of the finest studios in NY and 22 years later I did my Christmas Album in the same studio. Glenn

Here are some more photos  from that time period with the band.  Chubby Jackson had a “Little Rascals Show” that i was on several times with the quintet and then Chubby put together a kid band with his son Duffy who is a great drummer and played with Basie when he grew up and we did the Garry  Moore  “I’ve got a secret” show and as a result i did some gigs with Bobby Hackett and Jack Teagarden wow.  What great opportunity and very fortunate. Finally full circle when Suzanne Somers surprised me with a clip from the Garry Moore Show below !! 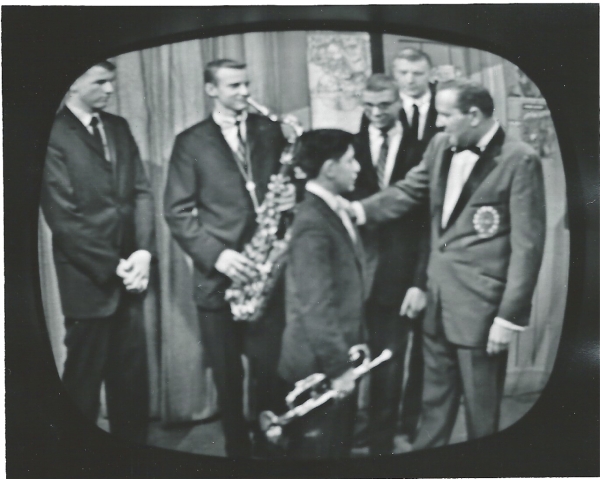 Finally  the family Jazz Club “Someplace Else” was very special. My brother Bob lead the band and brought in some of the greatest jazz players in NYC  like  Tommy Flanagan, Ray Bryant , Horace Parlan , Bobby Timmons , Booker Erwin , Bobby Jasper , Osie Johnson . Al Harewood , Connie Kay , Addison Farmer and John Beal.  Little did I know at 13 years old I would record and play with some of these stars later in my career.  Yes i was very fortunate indeed and a great time.  This is me with my dad below and on the stand at the club with these great jazz players !!

Also may dad was a great musician , conductor and arranger for many bands including the ground breaking Claude Thornhill band where he arranged with Gil Evans.  He did the arrangement on “Autumn Nocturne” which was on the flip side of the Claudes theme song Snowfall.