This was a concert in England with Bob Wilber.

Zoot Sims , Glenn Zottola , Teddy Wilson , Milt Hinton and Gus Johnson. I was very young and all the guys were 45 years my elders but you would never know it from the intensity of the band.This was recorded by someone in the audience so the sound quality is not great but you can certainly hear the energy. I felt Like I was at “Jazz At The Philharmonic”. Zoot was one of the great swingers of all time or as Milt Hinton called him “the salt of the earth” !

Published on November 5, 2015
Doc Cheatham plays the first solo and I play the second. This is the jam session portion of that night in 1988 at Carnegie Hall on the 50th anniversary of the historic Benny Goodman concert the first time ever jazz was in Carnegie Hall. Doc Cheatham , Myself , Bob Wilber , Buddy Tate, Al Grey , Norris Turney , John Bunch , Al Casey and Panama Francis. What a band and what a night

Years ago as a young lad coming up I had the chance to play my first gig with the great Zoot Sims almost 30 years my elder at the time along with the rest of the band being 50 years  and I had to work hard to keep up !   Zoot came up with Stan Getz and they were both part of the famous Woody Herman “Four Brothers” sax section and the West Coast sound in Jazz that came out of Lester Young.   Zoot unfortunately didn’t achieve the recognition of Stan at least with the general public  but he was loved in the music world as a “musician’s, musician”.  Milt Hinton a dear friend was on this gig and he told me Zoot was “the salt of the earth”.  This was the first time we ever met and Teddy Wilson was on piano and the great Gus Johnson on drums but Teddy was late coming down from Boston due to weather, so Zoot and I started a blues without the piano.  We had instant rapport when we found out we were both “ear players”.   I loved to get in the head of the legends I admired and had a chance to play with – like Zoot and Benny Goodman and share their musical approach which is how I learned and this gig was worth 4 years of music school even if you could get this in school which you can’t.  I am playing alto here and I remembered those incredible Al Cohn (another one) and Zoot records they did and what a honor it was to do some “trading” with Zoot.   My alto almost started to take on a tenor quality as I got into Zoots head and his approach to music. There is something I would like to say to the aspiring student or anyone on this point. If you ever have the opportunity to be around greatness get into their head and “permeate” while being yourself and see what it feels like for a minute. If you remember Star Trek and the “Vulcan Mind Meld” you would be surprised what you can learn very quickly.  My whole musical life has been like that !   Zoot passed not too long after this gig but you would never know it by his playing and I certainly miss him !   A bit later when someone was doing an article on me he said this about my playing which I cherish.

“Glenn has ‘big ears’ — he is a natural jazz musician.”

“I find him equally talented on both trumpet and alto.”

Here is another track or “barn burner” as we say . These guys lit a fire under me . Check out the interaction with Milt and Gus a real act in itself : 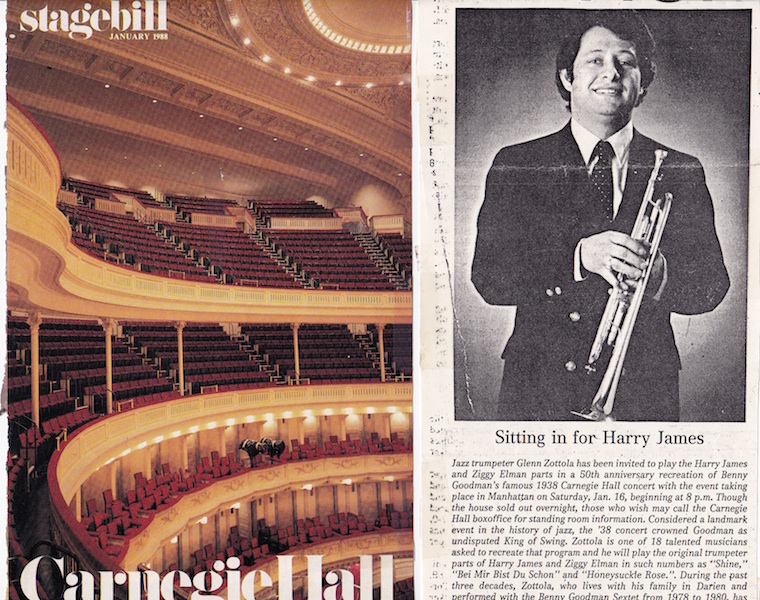 I spent 2 years with the Benny Goodman septet in the 70s playing with Benny every night a marvelous experience.  In 1988 I did the 50th anniversary at Carnegie Hall of the historic Benny Goodman 1938 concertl.  Bob Wilber led the band and we did the exact program from 1938 in the same order.  Anyone who was there in 38 was allowed to sit on stage with the band and these were the famous “Bobby Soxers” now in the 60s and 70s.  As I was playing I could see decades dropping off their faces as they relived that historic night when jazz and swing became the national music of the country and it was thrilling for me and one of the high points in my career.   Issac Stern did the intermission and talked about his love for jazz  as a young man  visiting 52nd street when he first came to NY.  At the end Benny Goodman’s daughter presented Issac Stern with Benny’s clarinet for the Carnegie Hall archives as this was the first time jazz was ever in Carnegie Hall.   I played lead trumpet and jazz that night sitting in Harry James chair. Here are a few tracks from the night the jam had an all star band that included Doc Cheatum , Norris Turney , Buddy Tate , Al Grey , Al Casey , John Bunch and Panama Francis. Doc takes the first solo and I follow him.

It was thrilling to hear Issac Stern speak during the intermission that night and his love for jazz and this music .

Milt Hinton was a dear friend and jazz legend.  We performed many jazz festivals together and he was on my Christmas Album.  I brought him to the Clearwater Jazz Festival for his 80th birthday and we performed for almost 10,000 people that night.  I had the local radio station give him a plaque for his achievements in jazz and we all sang happy birthday.  What a night and i miss him dearly and  I am honored at all the support he gave me in my career :

“Glenn Zottola — Top quality trumpet and saxophone. I’m pleased to add him to the list of musical giants I’ve played with. A great asset to the world of jazz.”
—Milt “Judge” Hinton

This is one of his signature pieces  “Old Man time” :

Amanda Ambrose was an amazing artist and we were dear friends.  We worked the Rainbow Room in NYC together and I had her guest with me at the Clearwater Jazz Festival .  I also brought down the great Milt Hinton that night for his 80th birthday and Milt was the bass player on Amanda’s classic trio albums in the 60s.  She was with Harry Belafonte  along with Miriam Mikeba and had her own TV specials on NBC.   She is missed but give a listen to one of her signature songs here as we were performing for almost 10,000 people that warm summer night outside.

Around the year 2000 while in Florida taking a a break from performing after my TV show in LA closed i bought some home recording equipment and started to experiment with different things on my various instruments especially the tenor which was new.  I also overdubbed my horn over some existing CDs that i liked by my favorite vocalists one with Sinatra and a few with Diana Krall just filling the “holes” in the existing arrangements no edits and looking for a sound and blend.  Also during that time i was spending a lot of time with Chick Corea and jamming and recording over his house.   I recorded 10 tracks during that initial period and called them “moods” which they were.

I just finished doing an album for Ira  soon to be released on MMO record label.  Thats my dog “Sushi”  who has great “ears” and supervised the session !  Ira and I got together today for no other reason than just to “play” the way it used to be.  Some of the greatest music happened that way like at Minton’s Jazz Club after hours in NYC.

In 1974 I brought a group into a restaurant in Rye, NY called The White Elephant.  I had various bands and guest artists and I was there quite awhile.  I will post various segments as I convert them from reel to reel as I brought in a tape recorder and recorded weekly.  This was an interesting period in my musical development and I was doing some “stretching out” as we call it and experimenting and definitely a creative period for me at 26 years old and wild,  looking back on it.   These band had some wonderful players Don Friedman , Duke Jorden , Johnny Morris on Piano , Bill Crows and Linc Milliman on Bass and Mike Resnikoff on Drums and guests like Frank Stroiser and Bob Mover.   Enjoy ! Glenn

hi ! I would like to share a track with you i did awhile back when i first started to prepare to record on Tenor. One of my favorite tunes. The strings were done by my dear friend Alan McPike in Scotland.  Enjoy ! 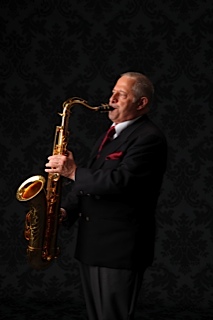 What’s great about this small club called musicians is meeting others you share a common reality with. One such musician is Alan McPike from Scotland. I met Alan a few years ago when i was searching for someone to do arrangements for me. Not only is he a incredible pianist but a wonderful arranger and singer and a real gentleman. I suggest anyone who needs arrangements go to Alans website “standardstraxs.com” link on the right and contact him and you wont be disapponted. Check out this vocal he did one of my favorite songs “Don’t Go To Strangers” where i overdubbed my alto as i was so inspired by his soulful singing. Glenn