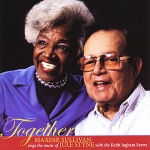 As you can see i have had the privilege to work with some great singers and stars from Sinatra to Tony Bennett , Mel Torme , Ella Fitzgerald , Peggy Lee , Joe Williams and many more. There is one singer extremely underrated who was a “musicians singer” meaning she was truly part of the band Maxine Sullivan who had a big hit in the 40s on a Celtic folk song she did swing style called “Lock Lomond”. She guested on my Christmas Album and i did several albums for her. We also traveled on the road together and did many live gigs. Maxine played trumpet also and i have a video of that i have to get transferred to DVD. She was an inspiration to a lot of people including Peggy Lee and she knew how to deliver a song in the most simple direct way and she could swing. This is the second album i did for her which was all Jule Styne music and Maxine was in her 70s at the time. There was one song on this album we did together “Killing Time” and the story goes that the lyricist was dying of cancer when she wrote these lyrics. I wanted to share this poignant moment and song with you and i decided to use the Harmon Mute for the solo on this song as i thought it was appropriate to the mood and the message. Glenn

This is the second album of the “songbook” series i did of great Jule Styne songs and wonderful Keith Ingam arrangements and Maxine truly a joy to work with. Also the producers of this album Bill Rodman and Ken Bloom who also did the Peggy Lee project along with were totally quality guys and put so much care into these albums.  Glenn END_OF_DOCUMENT_TOKEN_TO_BE_REPLACED

I loved doing this Christmas Album which was unfortunately never re-issued on CD with all my dear friends and some real jazz legends that are no longer here with us. I went to my friend Rick Petrone who was the program director for the jazz station in Stamford CT WYRS and they helped on funding the project along with Dreamstreet Records as a holiday promotion.  Everyone was END_OF_DOCUMENT_TOKEN_TO_BE_REPLACED 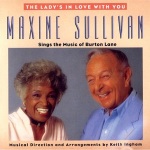 This album is a first in a series of “songbook” style albums I did for wonderful pianist and arranger Keith Ingham with all star bands.  I must confess I was not aware of the name Burton Lane having learned all the standards by ear with my mom at the piano rather than seeing the music.  Unfortunately composers like writers are not as known as the performers who do their work.  Burton Lane had END_OF_DOCUMENT_TOKEN_TO_BE_REPLACED