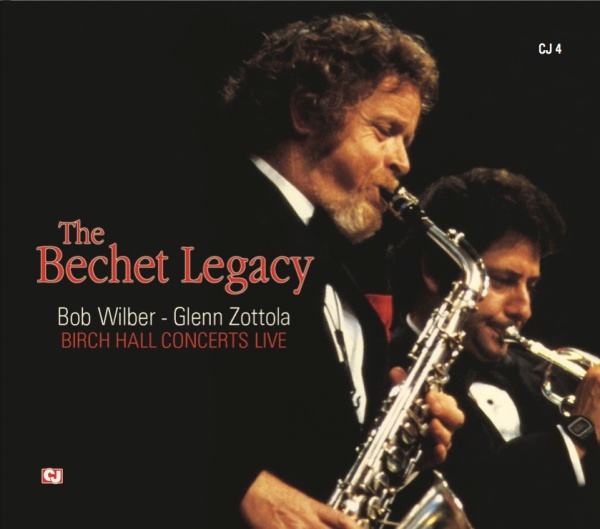 Available on iTunes, Amazon and Innercityjazz.com

This is a new 2 CD set release on the Classic Jazz Label.  In my career I have had several musical “foils” starting with Benny Goodman but Bob Wilber ranks at the top.  We were together 5 years after forming the Bechet Legacy and this band gave me a chance to really spread my wings on my Louis Armstrong roots.  The simpatico Bob and I had together was unequalled and this album documents the pinnacle of this band. Definitely worth owning for your collection available from Classic Jazz Records , iTunes, Amazon and CD Baby.

first Review “All About Jazz”  :
The Bechet Legacy: The Bechet Legacy – Birch Hall Concerts Live (2013)By
NICHOLAS F. MONDELLO,
Published: May 1, 2013Every so often a jewel of a recording is unearthed, prompting the obligatory question: “Why not sooner?” This wonderfully energetic, swinging effort is a treasure of an example.“The Bechet Legacy,” with woodwind artist Bob Wilber and trumpeter Glenn Zottola up front, delivers significant homage toSidney Bechet and to the Golden Era of hot jazz. The double-CD set, recorded live in England over three decades ago, is a home run of Ruthian swing.Somewhat overshadowed by his contemporary, Louis Armstrong‘s own legacy, saxophonist and clarinetist Sidney Bechet played a pivotal role in the development of the art form both here in the U.S. and as a longer-term resident and performer in Europe. His is the robust saxophone root of the tree that would eventually sprout Johnny Hodges(a Bechet student), Coleman Hawkins, and Charlie Parker.

Delivering an array of Swing Era standards from Bechet’s and others’ pens, Wilber, (a protégé of Bechet’s) and Zottola soar through the selections with enormous vigor. There’s significant swing across the two session dates where the musical magnificence—and joy—never ceases.

Legacy leader, Wilber, of World’s Greatest Jazz Band fame, swings heavy on both soprano and clarinet. His improvised lines burst with chops, innovation and expression. He’s got a gorgeous sound on both axes and is no “vibrato cornball” on either. Partner Zottola, a scion of Zottola trumpet mouthpiece fame, has all of the Armstrong vocabulary in his wheelhouse. He’s got a vibrant sound, chops galore and swings at a level that would send other trumpeters to the woodshed. Like Pops, he uses the upper register shrewdly to fire up his solo forays. These are two stellar musicians performing with the ultimate respect for the tradition at hand.

The selections include tunes associated with Bechet, Armstrong, Ellington and others (“China Boy,” “Lady Be Good,” “Memories of You). Supported by a cooking rhythm section of pianist, Mark Shane, drummer Butch Miles, guitarist Mike Peters and bassist, Len Skeat (and a vocal by Mrs. Bob Wilber, Pug Horton), this legacy creates its own.

There’s a timeless element to this wonderful music. With so much of today’s jazz over-intellectualized and sterile, Wilber, Zottola and team deliver a vivid, swinging exposure to a timeless musical tradition in a romp. 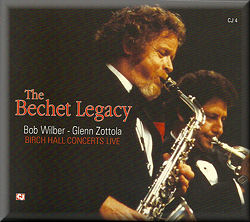 Bob Wilber formed The Bechet Legacy in honour of his former teacher, Sidney Bechet. Although Bob’s playing doesn’t sound at all like Bechet’s, he keeps the great man’s memory alive by playing his compositions and other music from the era when Bechet flourished. In fact Bob Wilber has a calmer approach to the clarinet and soprano sax than Sidney Bechet did. It was therefore a good idea for Wilber to recruit Glenn Zottola as his colleague in the front line of The Bechet Legacy, because Zottola has a very contrasting style.

Whereas most of Bob Wilber’s playing is legato, Glenn Zottola’s is generally the precise opposite – staccato. In fact Glenn might be called a disciple of Louis Armstrong, because his methods are so similar to Satch’s. While Bob Wilber charms with subtle romance and lyricism, Glenn Zottola astounds with high notes and hugely impressive displays.

This recording was made by an enthusiastic amateur at two concerts in Lancaster in the early 1980s. True to its name, The Bechet Legacy plays no fewer than eight compositions by Sidney Bechet, including the mysterious Egyptian Fantasy, the poignant Si Tu Vois Ma Mère, and the evocative Georgia Cabin. This is a reminder, if it were needed, that Bechet could compose atmospheric pieces.

Other highlights include Summertime, a tune which Sidney Bechet memorably recorded. Wilber follows in Bechet’s footsteps with several emotional choruses. The first CD ends with a cherishable version of Sweet Lorraine, starting at mid-tempo but hotting up when Zottola’s trumpet solo brings on the melodrama. Glenn also features in Memories of You, where he is backed simply by the rhythm section.

We can be glad that these recordings were dug out of the archives and made available for us all to enjoy.