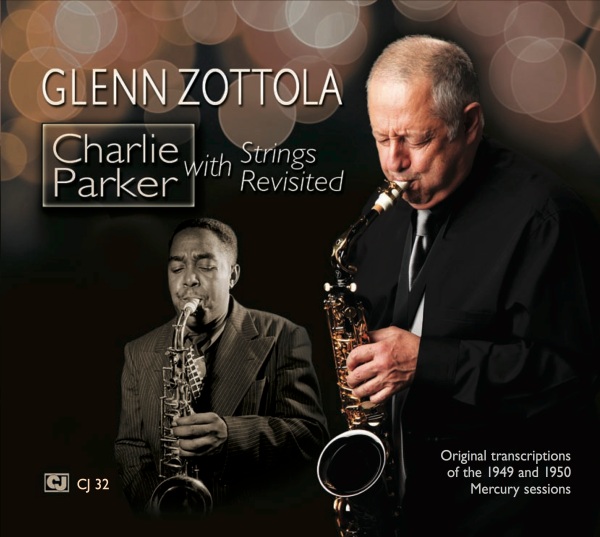 Glenn Zottola: Charlie Parker with Strings Revisited
Saxophonist and trumpeter Glenn Zottola came out of retirement from a long distinguished career, for the specific purpose of paying tribute to jazz artists who influenced his life and his music. The tribute series of albums which, include homages to Miles Davis, Clifford Brown and Stan Getz among them, concludes with a tip of the hat to the legendary Charlie Parker with a reprise of his classic Charlie Parker with Strings sessions of 1949 and 1950 capturing the romantic and melodic side of this giant. Zottola’s Charlie Parker with Strings Revisited employs new transcriptions of the original arrangements from both Mercury recordings covering nine pieces (five from the first album and four from the second), in re-visiting and re-imagining Parker’s swinging rhythms section with the help of lush string arrangements that made these recordings a personal favorite of the jazz icon.

One major difference of note here is, that Zottola chose not to simply duplicate Parker’s original solos but rather, to infuse the music with his own solo statements with, as he states, “Charlie Parker’s “spirit” in mind…” the result of course, is another captivating documentation of the “Yardbird’s” music with a decidedly Zottolian twist. Opening up with the 1931 John Klenner favorite and all-time standard “Just Friends,” introduced by the sounds of the harp and strings, provides the saxophonist his first alto solo setting the stage for what is in store. Recording the standards for Parker was a bid for greater exposure and adding the strings just made it a first among jazz artists and as such, Vernon Duke’s “April In Paris” was forever changed and here, Zottola’s treatment of the classic brings the music to life.

The Gershwin’s defining “Summertime” is recalled here quite well, though brief but beautiful, Zottola’s magical solos make it memorable. Two oft-recorded standards, “East of the Sun,” and “I Don’t Know What Time It Was,” are remembered here with much of the saxophonist’s personal style imprinted on the arrangement clearly wielding a lyrical alto. The somber and humble David Raskin/Johnny Mercer classic “Laura,” still conveys the emotional message the authors intended and this version does not change that but rather enhances the high-pitched alto in a delicate way.

The standard “I’m In the Mood for love” features Zottola in a more pronounced manner while the familiar “Everything Happens to Me,” takes on a unique charm complimented well by the strings. The saxophonist does some off his best soloing on the Schwartz/Dietz finale tune “Dancing in the Dark” leaving little doubt that this Parker tribute has an unquestioned Zottola imprint. Traditional jazz at its best, Charlie Parker with Strings Revisited takes one on a musical journey of past glory remembering one of the legends of the genre fulfilling his long-held desire to record with a string section. Alto saxophonist Glenn Zottola pays homage to a legend and one of his most memorable works with a striking musical message that may be just as memorable.
Track Listing: Just Friends; April In Paris; Summertime; East of the Sun; I Didn’t Know What Time It Was; Laura; I’m In The Mood For Love; Everything Happens to Me; Dancing In The Dark.

Musical genius has little regard for boundaries, whether those limits are stylistic, tempo, ensemble format, or, in this example, historical precedent. Expanding on that hypothesis, when an artist such as Glenn Zottola steps into the impossible-to-wear musical Florsheims of Charlie Parker, as he does so effortlessly here, he risks everything in a zero-sum game of musical Russian roulette. The emulation is a Herculean task, a pas de deux with the Devil fraught with musical and possible critical peril.
Here, Zottola, a multi-instrumentalist and musical savant if there ever was one, places himself in a musical Lion’s Den and performs his personal stylistic renderings of Parker’s classic string sessions of 1949 and 1950. The result is a portrait of both Parker’s enormous abilities and impact on jazz to this day and also Zottola’s incredible ability to perform brilliantly at such a level of precision and artistry.
The recording features Zottola playing nine cuts from Bird’s epic Mercury Records sessions along with impeccable orchestral transcriptions of the original Jimmy Carroll and Joe Lipman arrangements. If that weren’t enough of a feat, Zottola plays here entirely by ear and sans sheet music. Shrewdly, Zottola does not “cop” Parker’s original improvisations. He doesn’t have to. His interpretations are musically rich, inventive and, while they shade Parker’s style and technique, they are obviously not an attempt to play Bird’s licks. One gets the immediate impression that Zottola could do that if he foolishly so desired. He’s that good getting around the horn.
There’s a very famous photograph, a close-up of Bird’s fingers gingerly grasping his alto in an almost amorous manner as his musical magic poured out. I’d bet the house that Glenn Zottola probably holds his axe in a similar way since the result here is the same.

From the Liner Notes – About this album :
Charlie Parker has been referred to as the Mozart of Jazz. He had a tremendous love for Classical Music and In 1949 jazz history was made when Charlie Parker went into the studio and recorded an album with strings the first time any jazz player had recorded with strings. There were 2 sessions released on 10 inch LPs one in 1949 with 6 songs and another session in 1950 with 8 songs. These 9 songs are culled from both sessions. Much like my earlier Clifford Brown album this album is truly from my heart and what a joy to be able to re-visit this historic recording. These are all my own solos with Charlie Parkers “spirit” in mind using transcriptions of the original arrangements from those sessions. I simply just wanted to see what it would of felt like had I walked in the studio that eventful day. Of course having Charlie Parker open the door and point the way is priceless. Another thing I loved about this album was how it displayed the romantic side of Charlie Parker and his aesthetic and melodic beauty and I wanted to attempt to get that across in my playing. I want to thank Irv Kratka the president of Classic Jazz records for giving me the opportunity to do this project and I hope you enjoy it as much as I enjoyed doing it.
Glenn Zottola
Available on iTunes, CD Baby , Target , Barnes and Noble and innercityjazz.com

Glenn Zottola has had an impressive career serving as a sideman on trumpet, tenor and alto sax for artists ranging from Benny Goodman to Chick Corea. Here, he reaches into the heart of bebop founder Charlie Parker and focuses on the rarely appreciated side of the artist, that of a romantic. Zottola takes the original transcriptions of the historic 1949-50 recordings and breaths a fresh life into them. His sound is warmer and clearer than Bird’s, so that’s a major plus, while his solos and melodic statements are on a par with the originator.

The sweetness and freshness that mix between strings and horn are in abundance here. The lithe freedom of “April in Paris,” or pensive dreaminess of “I Didn’t Know What Time It Was” is captured perfectly by Zottola, while “Summertime” is a dramatic aria and “Laura” is fit for Dana Andrews. Zottola’s sound embraces you like a rippling wave foaming at the shore. If you don’t have the original, try this one instead for an intro to a sound that changed American recordings.