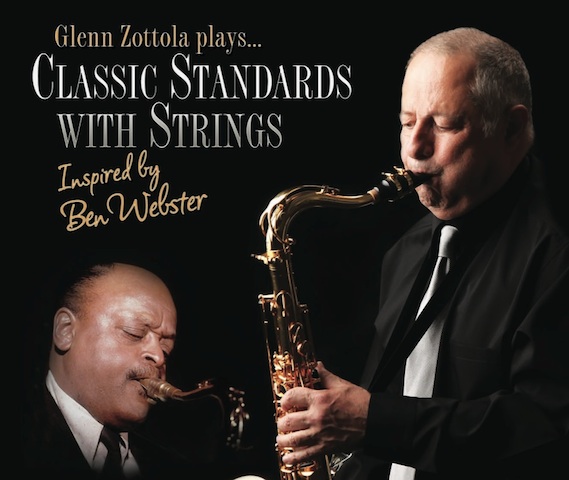 Jazz Legends Coleman Hawkins, Lester Young and Ben Webster are rightfully considered the Swing Era’s Pantheon of the tenor saxophone. It is from that glorious rock-solid foundation of the jazz tree that yet-to-come tenor greats such as Stan Getz, John Coltrane and others blossomed. The influence of the tenor triumvirate on those who followed them was enormous – Hawkins improvisational genius exemplified in the still-examined “Body and Soul,” Young’s suave and silky-smooth cool melodic and improvisational approach and Webster’s sensually breathy balladic and hard-swinging up-tempo interpretations.
With “Classic Standards with Strings – Inspired by Ben Webster,” multi-instrumentalist Glenn Zottola, yet again musically validates his worldwide reputation as both an insightful and highly expressive musical artist. Here he grabs his tenor and brilliantly delivers a dozen of the Great American Songbook’s most melodic and romantic jewels. The result is an aural masterpiece of tone, melodic passion, and lyric sensitivity.
Webster was a large man who was nicknamed “Brute.” However, his breathy entrances and tonal sensitivities belied the moniker. Zottola, who shrewdly doesn’t mime Webster’s sound or articulation here and who certainly isn’t brutish in any way – musically or otherwise – renders all of the smoothness and sensitivity that both the esteemed material and his mentor deserve. Working exclusively with the greatest of balladic material (“Can’t Help Lovin’ Dat Man,” “Laura,” “Embraceable You”) and backed by a lush string orchestra and superior arrangements, the recording is reminiscent of the great Jackie Gleason sides – you know, when music was about elegance, romance and class.
Zottola, first and foremost a melody man, takes this classic material and literally breathes interpretive life into it. His reserved dynamic feel and vocal-tinged vibrato are a case study in lyricism and stellar ballad playing (“Where or When?” “Yesterdays,” and “Stardust”). When he covers the melody, Zottola gives the marvelous illusion of singing via his horn. And, his well-thought out improvisations all gravitate from a melodic core. The entire effort is a rapturous dream.
Ben Webster is still revered worldwide and especially in Denmark where there is a street named after him (as well as a foundation that awards scholarships to young jazzers). However, I’m dead-certain that when the Danes get a hold of this effort from Glenn Zottola, they might consider getting a second street sign ready for another superb tenor man.