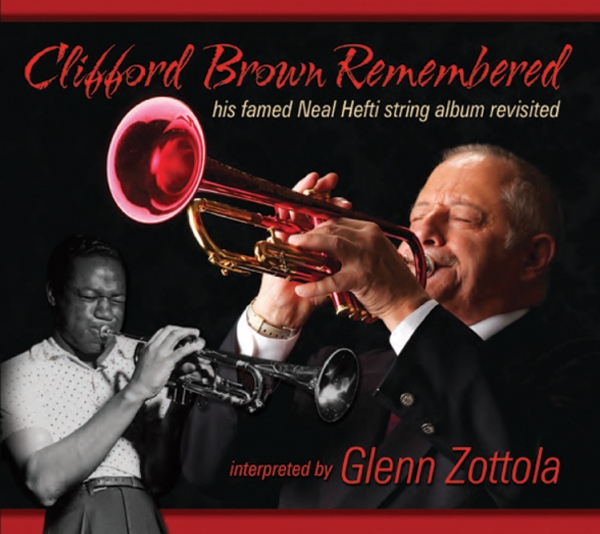 This was truly a labor of love very close to my heart.  Clifford was my first major influence on trumpet after Louis Armstrong and changed my musical life.

By NICHOLAS F. MONDELLO, Published: May 6, 2014 | 1,040 views
Glenn Zottola: Clifford Brown Remembered The trumpet is a cruel—yet loving—mistress. It can announce the slightest executional blemish, instantly betraying its player’s most sincere efforts, while also allowing its lover to express every possible nuance and emotion. The greatest Masters of the instrument in jazz—Louis Armstrong, Miles Davis, Chet Baker and others—all could brilliantly deliver expressive emotion. Of those in the trumpet’s pantheon, Clifford Brown, by virtue of his genius and enhanced by his mythology, stands out. Any attempt by a trumpeter to emulate Clifford would have all the risk of a tightrope walk across Niagara Falls.

With Clifford Brown Remembered, trumpeter Glenn Zottola takes up the Herculean task of playing tribute to Brownie in the most extraordinary manner. He’s taken the classic Clifford Brown with Strings recording (EmArcy, 1955) and, deploying his own formidable talents, recreated the recording in a musical salute. And, he’s done it marvelously.

The dozen selections (with an added cover of Dinah Washington’s recording of Benny Golson’s, threnody, “I Remember Clifford”)—were originally drawn primarily from the GAS (“Yesterdays,” “Embraceable You,””Stardust”) and are performed here in the same sequence as the 1955 recording. Zottola, well-respected as a mainstream and swing performer, interprets the Brown ballad performances with reverence and interpretive artistry. His lush sound is warm and inviting, and nearly as resonant as his idol’s. He possesses a fine vocalist’s sense of phrasing and lyric savvy. While there may be understandable comparisons to the original, Zottola’s ease of playing, technical and articulation skills, and superlative dynamic control make this recording shine.

Incredibly, in this recording, Zottola re-creates the legendary session performing it completely from memory, interpreting Clifford’s playing by ear. The original string charts (by Neal Hefti) were transcribed by Mark Stallings and are superbly performed. Given that the original recording was done in 1955, the music’s beauty withstands time’s test and glows yet again.

Rarely does a performer rise to a level of excellence as that of the artist that he or she salutes. Zottola certainly comes close. Be that so, while Clifford Brown remains to this day, nearly 60 years after his tragic death, an influential voice in jazz trumpet, the adulation that is performed here is indeed apropos. Glenn Zottola portrays himself not only an adoring acolyte, but a superlative and sensitive trumpet artist in his own right. And, just as Brownie did, Zottola certainly speaks.

Track Listing: Yesterdays, Laura, What’s New?, Blue Moon, Can’t Help Lovin’ Dat Man of Mine,Embraceable You, Willow Weep for Me, Memories of You, Smoke Gets in Your Eyes, Portrait of Jenny, Where or When, Stardust, I Remember Clifford.