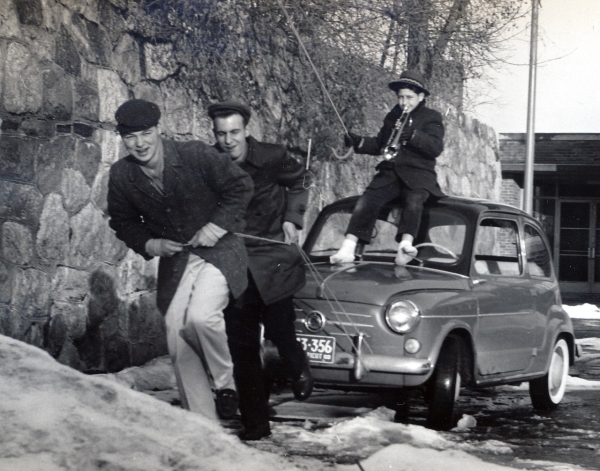 I was part of a jazz band when i was a kid check out the photo above just sent to me i guess i was destined to be a bandleader !  We had a ball and did a Christmas Album organized by pianist Stu Hemmingway a student of Bill Evans at the time..  Also we won a competition for the Stamford High School Jazz band led by Russ Martino who was the director and played the Atlantic City Jazz festival with Gerry Mulligan , Dinah Washington and many other jazz stars.  I didn’t live in Stamford and wasn’t in high school as you can see and I was “imported” from Portchester NY into that band !  I remember vividly being in the wings at the festival waiting to go on mesmerized watching the great Dinah Washington a real diva sing her big hit of the day “What a difference a day makes” like it was last night.   I recently hooked up with a good friend who was the saxophone player during that period Rod Blumenau second from the front in the picture and trombonist Dave Barnebl in front the “main reindeer pulling the sled. and he was very strong and i didn’t have to use the “rod” in my right hand too much at all.  Rod Blumenau is not only a wonderful saxophone player but also a pianist with several CDs out himself.  I will be posting more tracks from the albums i did during that period but here is one from the Christmas album. As a piece of trivia we recorded this at Nola Penthouse in NY one of the finest studios and 22 years later i did my Christmas Album in the same studio. Glenn

8 thoughts on “My “Kid” Christmas Album”